Everybody knows that the human core body temperature is at 37ºC. At rest. And when not ill. During exercise only around 20-25% of energy turnover goes into the movement, whereas the rest goes into heat. Of course, our body is able to effectively dissipate heat via various mechanisms of which sweat production is the most important one. However, under certain scenarios, for instance in the extreme heat, heat production is greater than heat dissipation. This means that body core temperature increases.

In addition to this, over the last decade there has also been a growing interest in adapting athletes to competition in the heat, as both the Rio and Tokyo Olympic Games were held in conditions of high heat stress. It is well established that humans can adapt to exercise in the heat by mechanisms like improved sweat rate, reduced amount of electrolytes in the sweat and increased plasma volume to name a few. Interestingly, scientists established that in order for these adaptations to occur athletes need to increase and sustain their core body temperature at or above 38.5ºC for at least an hour or so.

Collectively, we can see that knowing core body temperature is valuable both from the health as well as the applied perspective.

However, measuring core body temperature has so far been limited to the laboratory setting. The most common technique used is by inserting a rectal thermistor 10 centimetres beyond the anal sphincter. And yes – you can imagine this is annoying. For many even horrifying. More recently a new method has been developed – ingestible pills. This pill has a temperature sensor in it and it transmits the signal to a mobile device. However, those pills are very expensive. In addition to this, drinking can affect the measurements as the temperature of the drinks can be very different from the body temperature. That things can be even more complicating – we do not really know the location of the pill in the body as this depends heavily on the dynamics of the digestive processes.

More recently, a new product hit the market claiming to be able to accurately measure core body temperature. It is a very small device, worn on the heart rate strap on the chest and is working by measuring heat flux and skin temperature. Heat flux is defined as a flow of energy per unit of area per unit of time. We can experience heat flux everywhere around us, for instance, if we are standing on a cold floor, the floor has a lower temperature than the feet and heat flows from the feet to the floor. During exercise the temperature of our body (is usually) higher than the temeprature of the surroundings and therefore the heat flows from our body into the ”air”.

Manufacturer claims that it offers accurate and reliable data that could help athletes perform better. Help them do heat acclimation/acclimatisation effectively. Well – be a super sensor. Their marketing was super strong – they have been sponsoring very successful athletes and we were able to see the sensors on many Olympic medallists.

However, nobody so far actually tested the claims that the sensor is reliable and valid. The thing is that any sensor used by athletes should be reliable and valid. Before digging into the details, let us first explain what terms reliability and validity actually mean. Imagine that an athlete performs two exactly identical exercise sessions under identical conditions. This means that a reliable sensor should display the same values every single time. For example, if a cyclist climbs the Stelvio twice from the same starting point – Prato for example – and the sensor (e.g., a GPS watch) shows that the elevation gain was 1868 meters on the first climb and 1640 meters on the second, this means that the sensor is not reliable. If the sensor would show 1640 meters in both cases, then the sensor is reliable. Now you will say, but the elevation gain from the Prato to Stelvio is not 1640 meters. Exactly, you are right. And this brings us to the importance of the validity of sensors. So the validity means the sensor will show the exact value it should have shown. In the case of climbing Stelvio from Prato this means 1868 metres. Therefore a ‘’good’’ sensor must first be reliable, meaning that it will show us the same value every time, and once we are sure that it is reliable, we need to be sure it is also valid, meaning that it will show the correct value (compared to gold standard equipment).

So – we decided to test the reliablith and validity of the CORE sensor and we have just published a study showing that the sensor is reliable but not as valid as promised. Here is what we did.

The study consisted of two separate investigations in which we compared the sensor in question with the gold standard rectal thermistor measurement.

In the first one we assessed the sensor’s reliability and validity under low-to-moderate heat stress. To do this, we performed two exactly the same exercise sessions on the same individuals a week or so apart. After a short warm-up, participants were exercising at a stable exercise intensity for 60 minutes. Here is what we found:

We showed that the sensor is acceptably reliable, which means, as we explained above, that it will show us the same values every time. However, the sensor does not appear to be valid, meaning that the values obtained are not the ones we should have seen. As you can see from the graph below, the CORE sensor overestimated the ‘’true’’ value assessed by the rectal sensor. If we explain more in detail, we defined that the acceptable difference between the devices should be less than 0.3°C, as previously defined in literature. This means that if the difference between the value measured with a rectal sensor and the CORE sensor is less than 0.3°C, this measurement is considered valid. For about 50% of the measurements, the difference in readings between both devices was greater than 0.3°C. So it is definitely not valid.

In the second experiment we wanted to see what happens if the core temperature gets very high. We opted to reach the core temperature in the range between 39 and 39.5 degrees Celsius, as this is likely the highest possible temperature that is still safe to achieve in the laboratory. To do this, we turned off the fans in the Human Performance Centre and brought radiators in to make the laboratory very hot! After a short warm-up participants had a short ramp in power until they reached their FTP with an aim to elevate core body temperature to high levels as quickly as possible. After that, they were exercising at a constant intensity until the end of the exercise bout. Here is what this investigation showed us:

In the second experiment, we only tested the sensor’s validity, as heat acclimatisation (if we were to repeat the experiment in the same conditions) could affect measurements of reliability (you can read more about heat acclimation here). The results of the second experiment, again, showed us that the sensor is not valid. What is the most concerning is, as you can see from the graph below, that the CORE sensor underestimated the ‘’true’’ values at high body temperatures (above 39°C), which can be very dangerous for athletes. Moreover, again, the difference between the values of the two devices was greater than 0.3°C in 45% of all measurements. 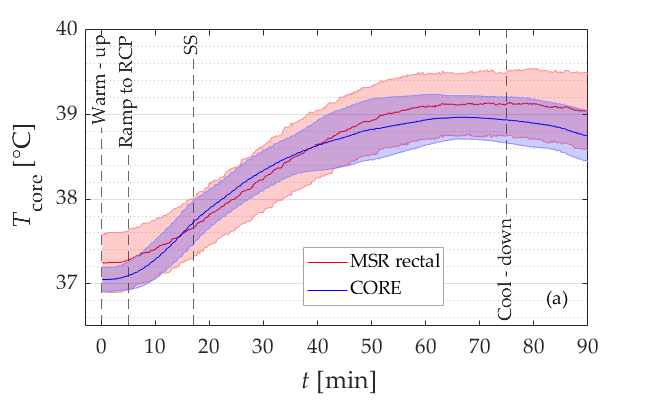 To sum it up. One has to be very careful when a new gadget comes to the market. Before it is endorsed for a broad use, it should first be validated by independent laboratories. And this is exactly what we did in this case.

One more thing… Tim wore the rectal sensor during a 175 km long outdoor ride to investigate how the CORE sensor behaves outdoors.

As you can see below, it didn’t do very well…

Throughout the reproductive years, females can experience numerous abnormalities in their menstrual cycle. Many of them can occur without being…

The basics of the menstrual cycle

Training in the heat for improved performance

We see a large majority of professional athletes doing an altitude trainings camp every year before major competitions. The main…

HeartRate Variability – When our heart is trying to tell us something

According to the definition, heart rate variability refers to the time difference between the individual heartbeats or a way to…